Quality crafts and community support since 1983

For decades, craft lovers have flocked to Meaford during Apple Season to take in the huge assortment of quality handcrafted items at the Apple Harvest Craft Show.

In the early 1980s, the Chamber of Commerce added a craft show to the Apple Festival, which had been running since 1969. But after a couple of years, the Chamber decided it wasn’t worth the effort to continue managing it. The original organizers, along with Rod and Betty Jane Brebner, disagreed. They decided to take it on themselves. 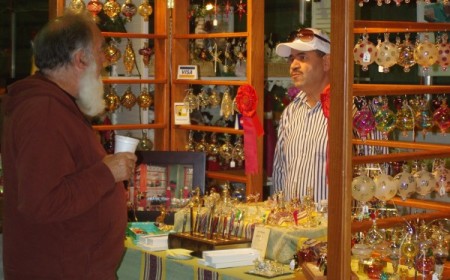 Bringing some of the previous vendors on board, including Betty Jane, who made silk and dried floral arrangements and wreaths, the organizers held the first Apple Harvest Craft Show in 1983 in the Meaford Arena auditorium. The second year, they moved to the arena floor (the rink), and filled it up about half with booths. The show has grown steadily ever since, and is now maxed out at 200 booths, filling the auditorium, the arena, and the Meaford Curling Club, across the street.

The show has about 20 percent turnover each year, which keeps things fresh, and the selection committee has had to become very selective, going through a stack of applications and photos, and picking the best each year. In order to even qualify for selection, all the work must be handcrafted, so you can truly expect a unique experience.